Two months ago it was launched our new collection of dried fruits, in this collection we have a special product of our gastronomy, Castilian Pine-Nuts.

Thanks to Food from Spain, we have a chance to know more about this product….

“Only about 20 spices of pine trees in the world produce pine nuts that are of sufficient size for productive harvesting. In Spain, pine nuts come from the Pinus pinea or Stone pine. This species can reach a height of 25 meters and is well-known for its umbrella-shaped canopy and longevity. It can live as long as 500 years. It needs plenty of light if it is to fruit and mostly grows on plains or low slopes. The pine cones mature in the third year producing large, flavorsome pine nuts inside a hard shell. They are known in Spanish as Piñones Reales (royal nuts), this being the designation used on the international market for the pine nut produced in Spain, which is the leading producer of this variety.

The Stone pine forms extensive woodlands in Castile-Leon, especially the province of Valladolid, in Catalonia and in the Andalusian provinces of Huelva and Cádiz, where it is also used for stabilizing sand dunes along the coasts. It also grows to a lesser extent in Extremadura and Castile-La Mancha. The Piñón Real has a high price because of the species’ low productivity and the difficulty of harvesting the nuts.Traditionally, harve 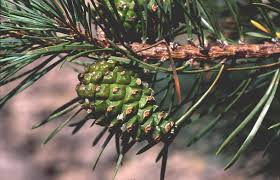 sters climbed the trees to pick the cones but today the process is done mechanically. However, skilled hands    are still needed to remove the white nut from its shell.

Pine nuts are an essential ingredient of traditional Spanish pastries such as panellets, otherwise known as empiñonados. These are balls of marzipan coated with pine nuts and are a frequent dessert in Spain at Christmas time, alongside turrón  and other almond-based candies. In Castile-Leon, pine nuts are a characteristic ingredient of cured pork sausages and blood sausages.”